Published by Tiago Rosa September 3rd, 2015
[Cross-posted on ThoughtWorks Insights: http://www.thoughtworks.com/insights/blog/taking-care-what-matters-your-team]
People are social beings, and their interactions form the core of agile software development. In order to build software, we tend to organize ourselves in groups we callteams. It's a nice name that evokes a feeling of collaboration and motivation, but are all groups of individuals actually teams?

We tend to think that what sets groups apart from teams is the presence of a common goal that guides people's actions. If several people get together to pursue a single goal, that's a team. This is true, but not the whole truth. What ultimately turns a group of people into a team is interdependency. A group of sales representatives working for the same company shares the goal of selling the products from their catalog, but each individual is seeking to sell more than the other, to obtain a bonus. That's not a team. A group of baseball players, on the other hand, is a team not only because they share the goal of winning; they also depend on each other. The third baseman can't win the game unless the pitcher and the catcher do a good job in defense. When people depend on each other to reach a common goal, they are a team.

As always, it's hard to look at subjective entities like personal relationships with analytical eyes. That doesn't mean we shouldn't try. Let's imagine a team of four software developers working in a project: Alice, Bob, Carol and Dave. Using simple math, you can see that even though the team has four people, it's actually comprised of six personal relationships (Alice<->Bob, Alice<->Carol, Alice<->Dave, Bob<->Carol, Bob<->Dave, Carol<->Dave)

If we were to start observing the way these people interact with one another, listening to what they're talking about when pairing, keeping an eye out for how they refer to each other during team meetings, and so forth, after a few weeks, here's an example of what we could observe:

From this, we get to the conclusion that while most of the relationships in the team seem healthy, there is some level of friction and distrust between specific people. But how healthy is the team as a whole? Let's try a visualization: 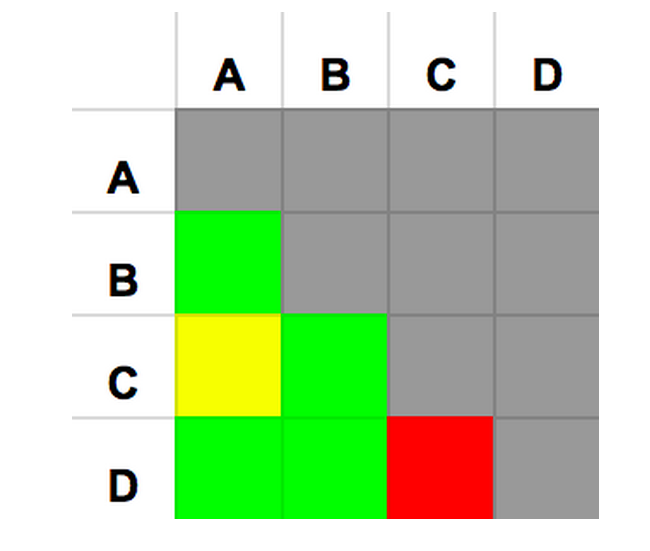 The green squares represent healthy relationships. Yellow means there is some level of distrust, but the relationship still functions. Red means a broken link: people are not able to work well together.

Most relationships are "green". There is some noise, but generally speaking it seems like the team is fine. After all, teams are supposed to have a little friction here and there, right?

But let's look again: suppose the green squares count as fully healthy personal relationships, while yellow ones count as neutral (zero) and reds count as negative relationships that are damaging the team (thus subtracting from the total). Something like this: 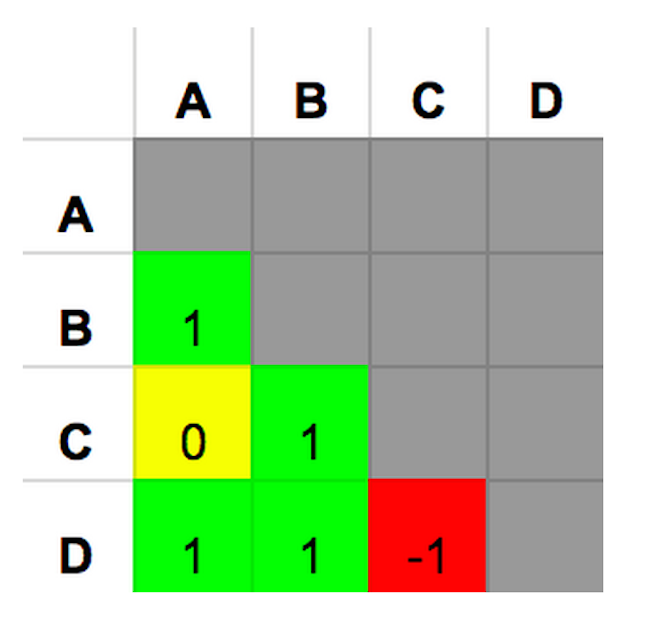 Let's add the numbers again: at the end of the day there are only three high-quality personal relationships. That may imply that our team is only 50% as effective as it could be. Should we still assume that, in terms of relationships, the team is "generally OK"? If a team is a collection of individuals (and their relationships) that depend on each other to achieve success, a severed personal relationship damages not only both ends of the link, but everyone else as well. In a highly functioning team, any unaddressed instance of distrust will spread like a wildfire, destroying the team's cohesion and undermining its effectiveness.

This is all, of course, a rough depiction of things much more important than numbers and colors. It certainly leaves out the nuances of actual people and their interactions. Even so, the main point is still worth considering: seemingly small disruptions in a team's relationships can cost way more than we think. As we strive to be part of and lead highly effective teams that deliver amazing results, caring for how people get together and providing the necessary means for them to thrive and grow as social agents should be a principle that guides our every action.

What can you do?

As a leader, invest time in talking to people in your team. Understand them as individuals. Retrospectives and other ceremonies might help you, but nothing beats face-to-face communication combined with genuine interest and empathy. Listen more, talk less, respect people's opinions and don't shrug off any concern as insignificant. Once you become good at something, delegate it to someone else and help them grow. Understand your team's culture and help shape it. Foster communication at all levels, in all directions, at all times. Share the context, build alignment. It's a lot of work and a big responsibility but, after all, are not individuals and their interactions the most valuable asset in agile?
comments powered by Disqus